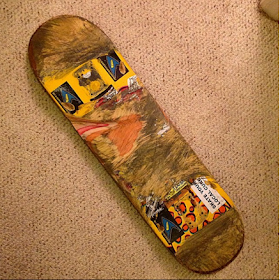 For the last two years I have been one of the thousands of skaters who has embraced alternate skate deck shapes. I've ridden shovel heads, punk points, curvaceous, wide bodied hybrids like the Street Plant Street axe, and I’ve had custom shapes made to my own specs, The whole time I've been pretty vocal about how these shapes can be more than just nostalgic, stylistic affectations.

About 3 months ago, for the first time in 2 years,  I set up my first popsicle deck. It was my attempt to come full circle with all my experimentations, and see how my perceived preferences stood up against the baseline of modern skateboarding.

Even in light of all of my shape advocacy, I would be lying if I said that I didn’t notice immediate advantages with the popsicle. There are good reasons to ride a standard shape, just as there are good reasons to ride a well-designed alternate shape. Teasing out what advantages come from the actual popsicle shape and which come from other factors like a shift in wheelbase size and width is a more subtle matter.


for my return to the standard shape, I doubled down and went with a Chinese-produced, mass manufactured deck: an Almost Chris Haslam resin 7 model with a 8.38” width with a 14.25” wheelbase.  I picked Almost  because a friend of mine who has a tendency to snap decks as if they were the proverbial popsicles of the shape’s name, has been extremely lucky with their wood, and the dimensions and slightly blunter contours on haslam’s model seemed ideal.

At the heart of my popsicle experience was a healthy drop in the length of the wheelbase I was riding.

A number of designers, brands and retailers have created their own recommendations for matching wheelbase sizes with riders, recommendations I have, in true skate anarchist fashion, usually ignored (I’M NOT GONNA LET THE MAN TELL ME WHAT WHEELBASE I SHOULD RIDE!!). I have been riding 14.75” to 15’ wheelbases for the last couple of years. The Haslam’s 14.25 wheelbase size actually lines up with the wheelbase I am ‘supposed” to be riding according to most of these recommendations.

Knocking half an inch off the WB changed the whole dynamic of how my front foot slid and how my back leg compressed in an ollie. When I ollied the Haslam, the tail of the board sucked right up against my feet as my rear knees bent, giving a very controlled, very level and snappy ollie. This effect improved my ollie even more once I altered my front froot slide to actually scrape beyond the front bolts and partially into the nose, a technique a lot of guys who learned to ollie on the tiny-nosed decks of the 80’s, have neglected to learn. All in all, the shorter wheelbase (in combination with a shorter and more rounded tail, more on that later) had me popping ollies higher, in a shorter arc. The advantage on ledges and in popping off skatepark banks was dramatic.

Of course, you could put a short wheelbase on a shaped deck and gain some of these advantages, but very few brands offer shapes in the smaller wheelbases. Finding a stock 14.25” shaped deck is almost impossible and 14.5” is very rare. If there is one thing I have learned from my switch up it is that a lot of guys who love riding the shapes may be ill-served by the long wheelbases that come with them, especially if they are street skating. Brands might do well to branch out with their shaped deck designs

The shape and the dimensions of my popsicle’s tail also played a role in that new snappier pop. The Almost Haslam had a 6.5” inch tail with the standard rounded shape. I’ve been riding 6.75 and 7 tails. The shorter tail definitely let me channel more power straight down much easier, this combined with the short wheelbase meant I could place my front foot farther up the board and still pop a good ollie. On a small wheelbase with a short tail, you can pop an ollie with the the edge of your front foot practically touching the mounting bolts. This translates to much more stability setting up for a trick, and it makes it much easier to set up for the next ollie in a line. In a park setting it means there is a lot less sliding your foot around to adjust from pumping down a transition and popping an ollie on a pyramid or to a ledge. On the street course at the skatepark, the popsicle, or at least, the snappy tail and reduced wheelbase of that popsicle, was supreme.

The signature round shape of the tail can be a mixed blessing. The round tail design of the modern popsicle is designed for instability. Applying pressure to the rounded corners will essentially tip your board sideways, a motion at the heart of a lot of flip tricks. In fact, on the modern popsicle, the rotation of a kickflip or 360 flip comes just as much from the pressure of the back foot as it does the flick of the front foot. In the case of the modern 360 flip, the back foot “scoop” is often doing most of the real work. Once again, a lot of guys who struggled to nail kickflips and tre flips on the long-flat tailed decks of the late eighties find themselves stymied when it comes to getting the proper rotation on a popsicle. That's because, on those old tanks, the front foot was the engine that drove the flip. Apply the that technique to modern pop and chances are you will never get enough leverage in your pop to get off the ground, or at best, you will get a clumsily executed “rocket” flip. Kickflips on a popsicle are essentially a completely different trick than the flips we learned on fat boards in the 1980s. 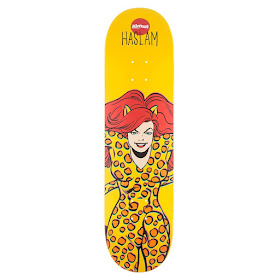 Since the popsicle tail is basically built to tip, it means to get the most stability and pop on a plain old run of the mill ollie, foot placement on the tail must be more precise. If your foot is not well balanced and centered on the tail, the deck is going to pull sideways in one direction and tip a bit, meaning you will lose a lot of the power you are trying to put in your ollie and lose a lot of control as well. A flat, square-cornered tail shape, however, means you can apply pressure out of the “sweet spot” in the tail and still get a fairly solid, stable ollie.

Of course, even on a square tail you are going to pop better when you apply pressure to just the right spot in the center of the tail. One advantage of the rounded popsicle tail is that it essentially forces you to make sure you are always centered in your pop. It is a sort of conditioning tool in a way. You may start out less consistent on a popsicle tail, but the ollies you do do will be cleaner and higher. The difference is a matter of consistency and on-demand stability versus versatility, improved vertical pop and the potential for cleaner flip tricks. There really is no “better” option. It's your call in accordance with your own style.

Another point of contention with modern decks is their durability. Veteran skaters often swear up and down that “they don’t make'em like they used to” and single out Chinese production decks as especially suspect. On the whole, my Chinese popsicle took a pretty good beating and maintained a pretty good bit of elasticity and pop right up until the end. In terms of the longevity of aforementioned pop, the Almost Haslam certainly couldn’t compare with the eternal stiff snap of a workshop board like a Fickle deck, but it certainly stayed snappy up to the point where tail wear and other factors made a deck change necessary anyway.

Tail wear on these popsicles is, in my experience, an issue. As previously mentioned, the rounded shape of the tail is going to direct you to snap your tail on a fairly narrow “sweet spot”. This means you are impacting the tail repeatedly in a smaller area than you might on a flat-tailed deck. It adds up to faster wear in the exact spot you make contact. This definitely made me feel as if my tail got shorter quicker. In a sense, the deck hit the perfect “broken in” feel much quicker than some of my shapes, but that optimal broken in feel lasted for a shorter amount of time. Even though the wood was still nice and springy, it began to get a “softer” pop a bit quicker, making me feel like the deck was sogged out even though the wood was still solid. Still, I got 3 months of riding out of it. I’d call that respectable, if not comparable to the 6 to nine months I get out of my workshop decks.

Edge wear and ply bonding was pretty good. Being a curb enthusiast and a generally mediocre skater, my boards take a lot of side and nose impacts, not to mention a lot of top down slams to the ground from bailing ollies over hips and off banks. My Haslam took several hard head-on hits on curbs and ledges without chipping out or separating the plies. Once again, in this category the small-batch workshop boards I have ridden reign supreme, but the durability of the Almost wood was certainly beyond satisfactory.

The final verdict on this experiment: mixed.

I am definitely dropping my wheelbase from now on. Although the 14.25” size was definitely not optimal for bowl riding, splitting the difference and bumping up to a 14.5” wheelbase might work out well. A shorter tail than the 6.75” I have been riding is definitely better for me, although I’m thinking a squared 6.5” tail may be my best strategy. It's possible a square shape with a short length will mediate stability with the increased power the better leverage of the shortened tail gives me. The popsicle experience has certainly made me more wary of “punk point” noses. Nothing beats having a full sized nose, not just for nose slides and other ledge tricks, but also for ollies and, yes, even slappies. Cutting a 3rd of the real estate off your nose off just to get a “punk” look to your shape is not worth it. I’ll look more “punk” locking better backside slappies and more properly tweaked ollies. I think the Grosso-style “shovel’ nose is the way to go for me.

The big take-away from it all : ride what you like, but don’t write anything off you haven’t tried in a while. “Just because everyone else does” is no reason to ride a standard shape. Then again, it's no reason NOT to ride one either.
Dadmiral Ackbar at 12:40 PM
Share